What is a Reciprocal Roof Roundhouse?

A reciprocal frame is a class of self-supporting structure made of three or more beams and which requires no centre support to create roofs, bridges or similar structures.

A reciprocal roof is a self-supporting spiral of timbers where each timber rests on the last and needs no central support. It is assembled by first installing a temporary support that holds up the first rafter at the correct height. Further rafters are added, each resting on the last. The final rafter fits on top of the previous rafter and under the very first one. There is normally a small gap between the first and last rafter which is closed by removing the temporary support. This act is known as ‘dropping the Charlie’ as the central support is called the ‘Charlie stick’.

The above model is interactive, click and drag to orbit around the frame.

We started by cutting down 8 large alder trees for use as uprights. Alder is not the best wood to use for this kind of thing as it loses some strength with age, but we have an abundant supply of large straight alder so decided to use it with caution. Three meter sections were cut and peeled using a draw knife, peeling is supposedly good for the longevity of the wood. We then placed the upright posts (approximately 30cm in diameter) into holes around 80cm deep, this is about the depth where the soil becomes very difficult to dig. The ends of the uprights were charred, some say that this can prevent insects from burrowing into the wood, but it is difficult to find good evidence for or against the beneficial effects of charring wood that is to be in contact with the ground. The posts are packed on all sides with hardcore (broken up bricks and concrete) so that water can easily drain away. 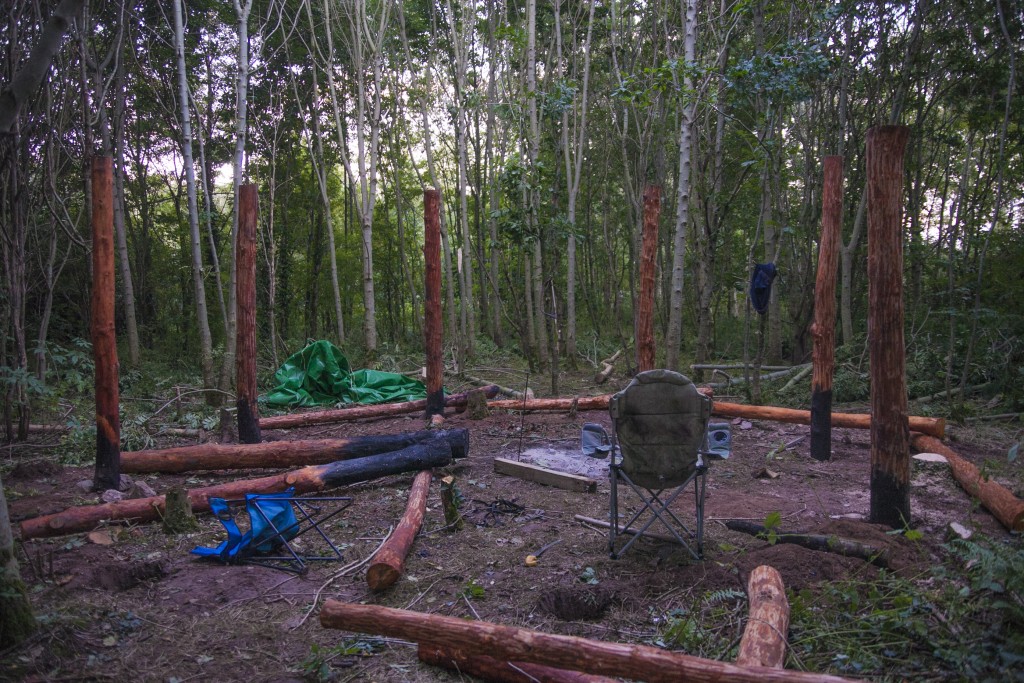 Once all 8 posts were in the ground we used a plumb line to straighten them up before fixing each in place with thin wooden bracing. We then used a transparent hose filled with water to mark the correct finalised height on all of the uprights (an old Indian trick), and then used a chainsaw to level them all off to the marked height. At this point the posts were all pretty sturdy, enough to stand on and juggle across.

Next we prepared all of the henge pieces (these are the beams that go between uprights). We cut and peeled eight more alder and put a little flat where they met the upright on both ends, we also cut out a half lap-joint where two henge pieces would meet. Most of this work was also done with the chainsaw. It is pretty important to make sure your saw is nice and sharp for this kind of stuff, we normally sharpened the saw every time we refilled it with fuel.

To hold the henge pieces in place we drilled a 26mm hole down through the two henge pieces and into the upright and pinned them all into place with a 25mm oak dowel. We used a large auger bit to do this, I wouldn’t recommend it, the auger would pull itself into the wood and get stuck very easily, we think this had something to do with how moist the wood still was. We switched to using a spade bit, this worked but was slow and required you to push very hard to get it through. We left a little of the oak dowel protruding above the surface of the henge onto which we could slot the roof rafters. 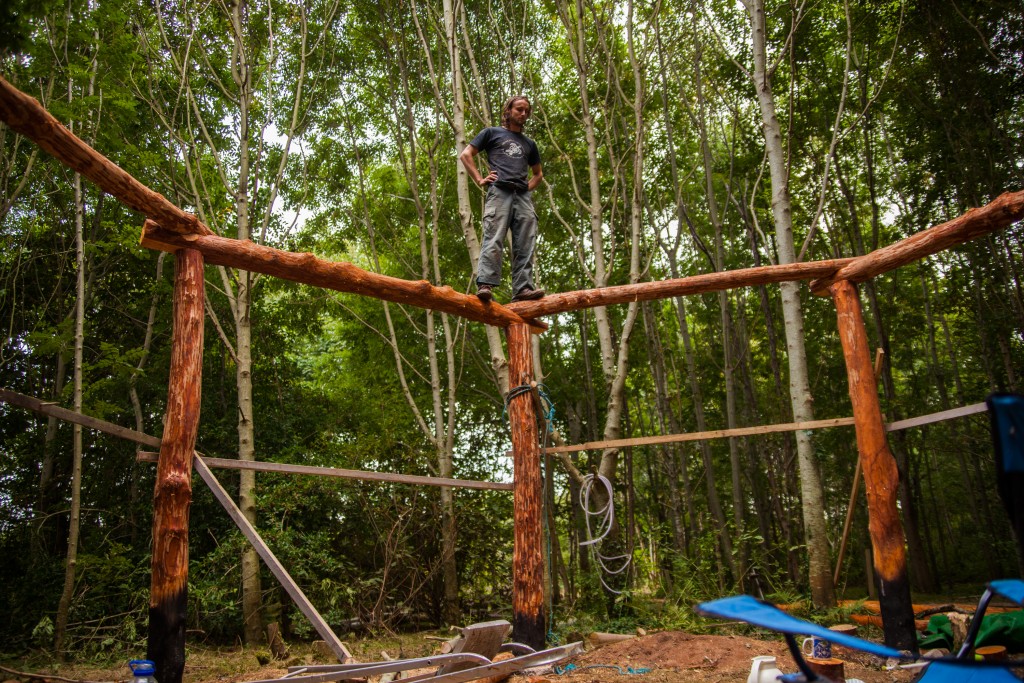 We cut and peeled 16 five meter long roof rafters, we planned to have a little over 1m overhang outside of the henge to protect the walls. We made a CAD model to determine how to position the roof beams to achieve the central hole size are roof angles we wanted, however you can work out the key dimensions pretty easily by hand. We went for a roof angle of around 25 degrees, although some people seem to go for shallower angles. Search google for Tony Wrench’s website for information as he explains reciprocal frames well, there is a video floating about on the youtubes by him that also shows it well. We just used a computer model as we wanted to experiment with how different arrangements would look quickly. 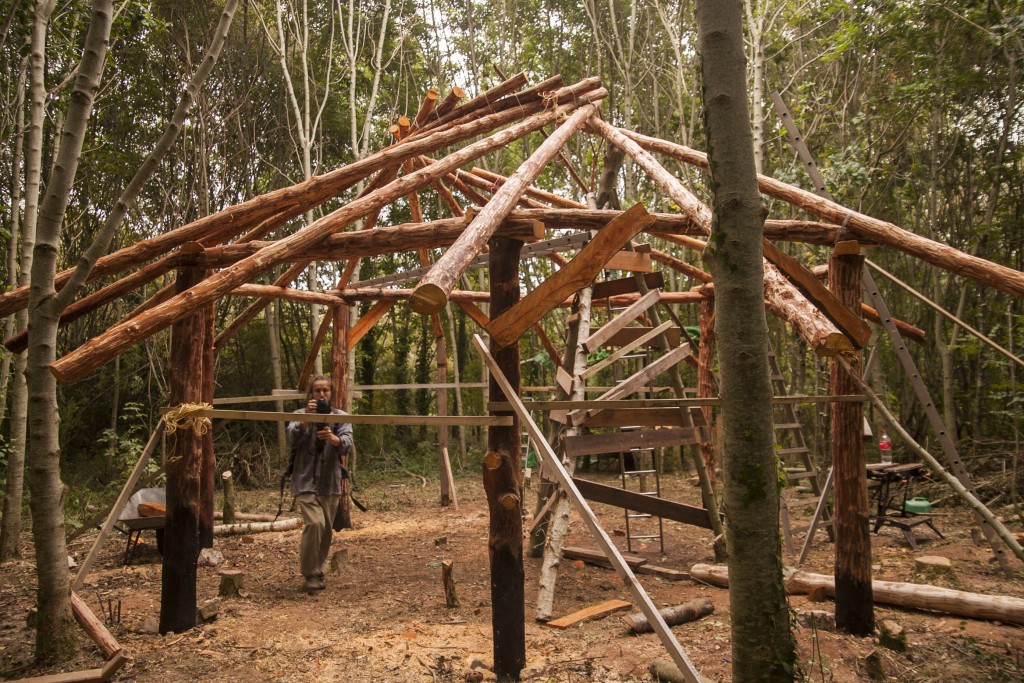 We made a tall tripod onto which we could place the first roof rafter, we then went around the circumference of the building adding all the other rafters one at a time. The rafters have a 26mm diameter hole in them where they meet the henge pieces, here the oak dowel slots into them stopping them from sliding down. At the top they were temporarily held with binder twine. Once the final rafter was in place we then slowly removed the tripod, which supported the first rafter, until the first rafter sat on the very last rafter, completing the reciprocal frame. It took quite a lot of fiddling to get the roof beams into the perfect spot, but once we were happy with their position we drilled holes through each neigbouring pair and bolted them together using stainless m10 coach bolts. This is not totally necessary and a good binder twine lashing would probably be enough to hold the roof together long term. Here is a quick video of putting up the roof rafters. 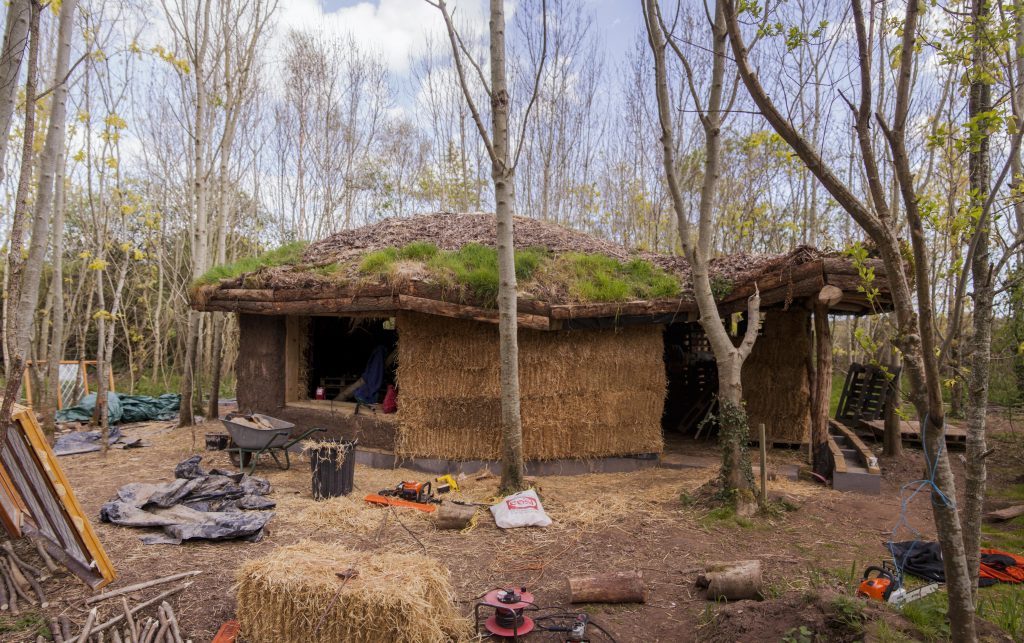 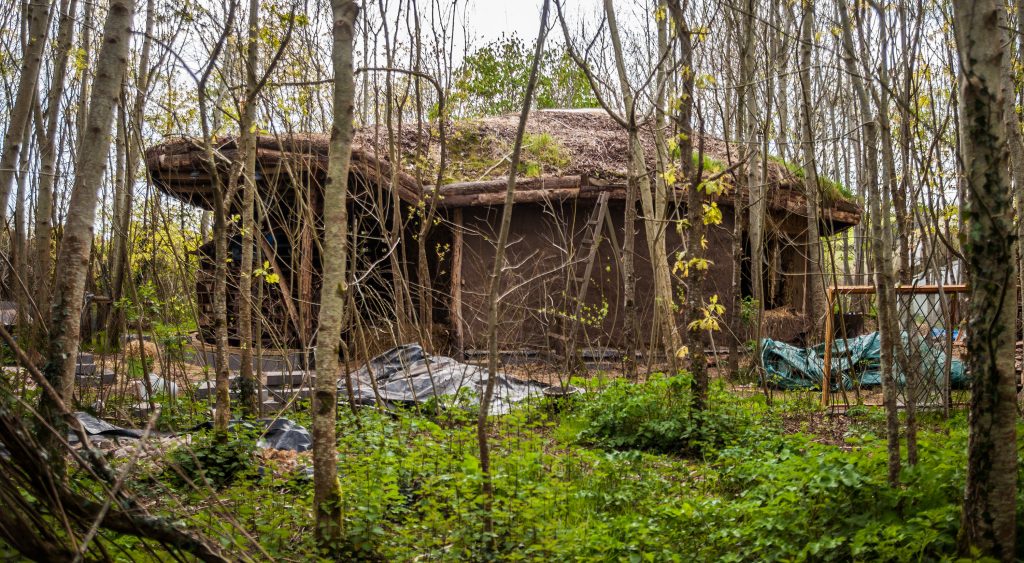